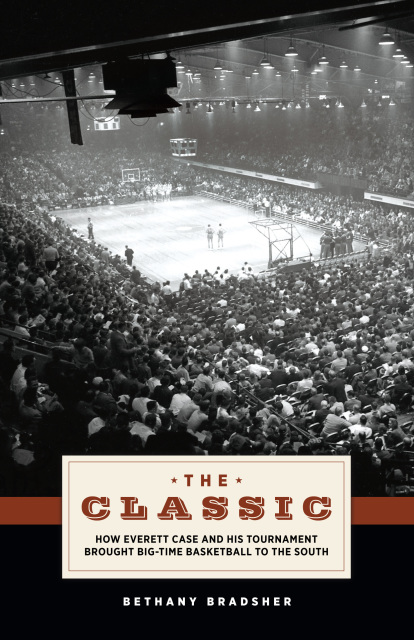 Before Everett Case came south to coach at N. C. State, football was the region’s big sport. Within a few years Case and his Indiana-style basketball changed all that. And nothing showcased the South’s new obsession better than the Dixie Classic, Case’s holiday tournament hosted at Reynolds Coliseum in Raleigh, North Carolina.

Each year from 1949 to 1960, N. C. State, Duke, Wake Forest, and the University of North Carolina invited the top teams from the rest of the country to come spar with them.

“The Dixie Classic was probably the foremost holiday tournament in the country.”—Woody Durham, play-by-play announcer for the UNC Tar Heels, 1971-2011

“It was as great as any event I’ve ever attended, of any kind, including political conventions.”—former North Carolina Governor Jim Hunt

A cast of characters that includes Frank McGuire, Bones McKinney, Oscar Robertson, Billy Packer, and Jumpin’ Johnny Green, along with Coach Case, the best college hoops stars of the fifties, and Mob-connected gamblers from New York, combine to make The Classic a great read.

From exciting basketball action to the scandalous revelations of point-shaving which brought the tournament to a sudden end, The Classic tells the untold story of a tournament that helped transform a state and brought big-time basketball to the South.

It was “the greatest basketball tournament in the United States of America. No single cage event in the nation can match this one in competitiveness, attendance, and spectacle.”—Seton Hall head coach John Russell